My Android phone has been running flat very quickly lately.

In the battery settings was an unfamiliar process, ‘mdnsd’, using a lot of power - even more than the screen, which is usually the top process. 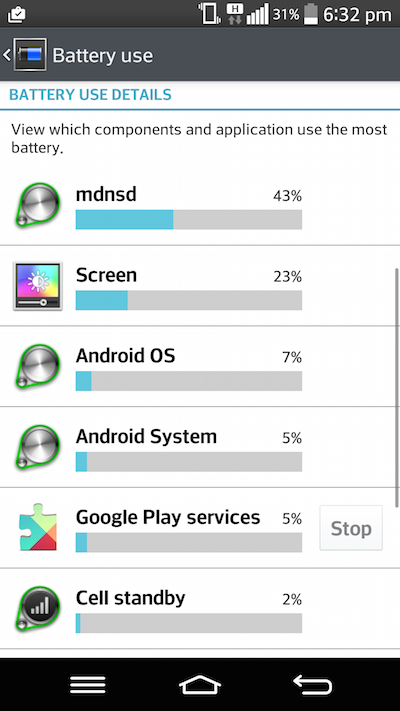 mdnsd is a process, not an app - it’s not something I downloaded from Google Play, and it was not obvious what made it appear. But after finding out that my brother had the same problem, we quickly figured out that it was caused by Freeflight 3, the app to control the Parrot minidrone that he gave me for Christmas.

So, if mdnsd is draining your battery: uninstall Freeflight 3, or (if you need it), just make sure you kill the process every time you finish flying your drone AND when you restart or first turn on your phone. (You can hold down your home button to see what processes are secretly running on your phone, and stop them.)

I’m putting this here so other people with the same problem will hopefully find this. The only discussion about the problem I could find at the time was in French.